To win a game of badminton you have to hit the shuttle with your racket and land in your opponents half, by doing this you have one point and if you win enough points you will win the match. A good play will typically need excellent fitness, fantastic badminton skills and knowledge of the game. 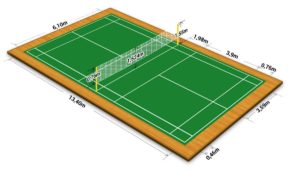 Image source: MightyGoods
A player must only hit the shuttle once before taking the shuttle over the net. This rule also applies to doubles. Unlike volleyball, a player cannot hit the shuttle more than once in their side of the court.

For fun, you may play badminton outdoors like on a beach or in the park. However, playing competitive games will never be played outdoors due to the wind that can affect the shuttle’s play. A shuttlecock is so light and the slightest bit of wind will lead it astray. This could result in some very angry disputes with your opponents. If you’re serious about badminton then playing indoors is always recommended.

Badminton courts have their own type of net. This net is much lower than that of volleyball but much higher than the net in tennis. If you’re going to your local playing centre, make sure you ask the staff where the badminton net is, as it’s different to a volleyball net. The badminton net height is 1.5 metres.

If you have to set up the net yourself and make sure you check the following:

Often, you’ll find the court has many different lines that aren’t associated with badminton, like tennis lines or a volleyball court lines. Look out for solid colours, as the badminton lines will be the same.

Badminton games will typically consist of either:

The game will consist of two or four players on either side of the court. When it is just two players playing, it is called singles, and doubles is pretty self-explanatory which is; two versus two. In a match of doubles any player can hit a return of the shuttle, a player does not take it in turns to hit the shuttle. However, only one player can hit the shuttle at each point. In tournament badminton, there are usually five types of games, like:

The doubles are also known as level doubles. Once you’ve looked at the lines on a badminton court, you might feel a little confused because there are so many lines. Like tennis, the court is made up of lines of both single and doubles. The narrow lines for the single matches and a wide lines for double matches. The wide lines are also known as tramlines which you will find in tennis, also. The reason being is that gives enough room for a doubles match as the space at the narrow lines is way too small for a game of doubles badminton.

To start a game of badminton, a player must serve the shuttle. Obviously, there are many rules to define a fault in a game of badminton due to the player misusing rules and gaining an advantage. Even in casual play, the players must follow these rules to ensure a completely fair match is played.

To serve, the badminton player must use an underarm serve action to hit the shuttle. Unlike tennis, the player is not allowed to hit the same with an overarm shot. The reason being is that the shot would be too powerful and too difficult for the receiver to return, making it unfair. To hit the serve, the player must hit the shuttle at waist level. This is an important rule of the game and must be followed at all times.

Just like tennis, to decide who servers first, a coin is tossed. The umpire will ask a player to call the coin and if the coin lands on their call, the player will decide to serve or not. Though, in a casual match the person will just throw up the shuttle in the air and once it lands whoever the shuttle is pointing at, they will then get to serve first. Or, you could play a rally and whomever wins the rally will serve first if they wish to.

The point system in badminton is quite simple. Each time a rally is won you will receive the points in your favour. The scoring system will start from zero. Once a player has reached a score of 21, they win the game of badminton. However in tournament play, matches are won by best-of-three. So, scoring a total of 21 points before your opponent would mean you win one game. To win the entire match, you must win a total of two games. Therefore, the match could last either two or three games in total.

If you were to win a rally you would also receive the next serve. If your opponent’s serve was before the last rally, it would then leave to your serve.

Again, just like tennis, to win the match you need win by two plus points. For example, if the score was to reach 20 all, then scoring 21 points with not be enough to win the game. This player will then need to this score next 2 winners getting, a player will always need a two-point advantage. However, 30 points is the upper limit, so if the game was to reach 30-29, that player would win since the upper limit has been reached.

When playing casual matches, its good practice to say the score after each point. By doing this, you will avoid many disputes about the points. Before you take a serve, you should announce the current score and let your opponent know. This way your opinion can agree with the score and play can continue without any arguments. I’m sure we’ve all had games where things became a little too heated and insults were said!

In badminton, the right side of the court is known as the even service, and the left side of the call is known as the odd service, this is to know which side you should serve from. For example if the person serving is on even points, they will then serve from the right side. If the score is of odd points, they will then serve on the left-hand side. Is worth remembering that zero is an even number. In badminton, the first server will always serve on the right-hand side because of the zero point being even.

Just like tennis, the receiver will stand in a diagonally opposite direction from the server. This means that both players are standing on the same side of the court from that viewpoint. However, it is always diagonally. For example, if the score is zero, the server will serve from the right side and the receiver will stand at the diagonal box from the server. The players will never stand in different boxes of evens or odds (like one even and one odd).

People often get confused with the scoring system used in doubles, nevertheless it is almost the same as singles. Once the game begins, and with scores of zero, the pair that serves first will choose one server and the opponents will choose a receiver to the serve using the even and odd system. If the serving team wins a rally, the server will serve again for the next. The serving will not alternate between the players

A service fault basically means that the serving player has made an error. If you break a rule in badminton, it’s known as a fault. The umpire will then call “fault”. All points will usually end in faults like a rally. Once a rally ends, it is because a player has made a fault and the point will be awarded to the winning player of the rally.