A great pair of quality boxing gear is needed by every good boxer. It doesn’t matter if you are a pro, enthusiast, or beginner, you can’t just blindly choose the prettiest gloves or cheapest gloves and be done with it. Using the wrong gloves will seriously injure your hands. That’s why you should invest time in choosing the best boxing gloves out there.

Here are the best Headgear for boxing

Boxing, the Noble Art, a sport that has been in practice since the time of the Ancient Greeks and has been an Olympic sport since 688 bce. Matches or ’bouts’ consist of two competitors going head to head in a square platform called a ‘Ring’ under the supervision of a referee and judges as well as the boxer’s personal trainers and coaches. Competitors are separated into different weight classes to even the playing field. Fights are split up into a series of 3 minute rounds with a short intermission in-between, modern convention dictates that non championship matches last 10 rounds while championship matches last 12, however amateur matches can last from 4-10 depending on the competitor’s experience.

Modern boxing’s guidelines and regulations are heavily based on the Marquess of Queensberry rules published in 1867. There are several governing and sanctioning bodies in modern day boxing including the British Boxing Board of Control (BBBofC) and the World Boxing Council (WBO) as well as the International Boxing Association (AIBA) which also deals with amateur boxing. The rules vary slightly between amateur and professional boxing matches however there are over-arching rules which apply to both for conventional as well as safety reasons. If the two competitors are still standing after the predetermined number of rounds is reached the decision over which fighter wins goes to the judges.

Another rule is that the fighters are prohibited from punching below the belt as well as attempting to trip, push, bite or spit at the other competitor. If there is a clinch (a defensive strategy in which one competitor places their arms around the other’s waist in order to create a temporary pause in the fight) which is broken by the referee the two competitors must, in most circumstances, take a full step back from each other before continuing the fight. Failure to adhere to or violations of these rules may result in the referee issuing warnings, point deductions or straight up disqualification of one of the contestants. A competitor may win a boxing match in a number of ways. The competitor may win on a points decision where points are assigned by a panel of up to three judges based on connecting punches, defense style and knock-downs along with other measures of skill. A win may also be achieved by a straight Knock-out or K.O. This is achieved when one competitor knocks down the opponent who is then unable to regain their footing before the referee counts to  10, however it does not necessarily require the opponent to be rendered unconscious.

The third way a match can be won is through a Technical Knock-out (TKO) wherein  the referee or fight doctor rules that the competitor is unable to effectively continue to participate in the match due to their injuries. The final way a match may be won or lost is due to one competitor being disqualified due to a severe breach of the rules. In amateur matches such as those in the Olympic and Commonwealth games wins and losses are, in general, more reliant upon a points system in which the judges decide the victor of the contest.

Additionally amateur contestants are required to wear protective headgear and have a strict regulation that the weight of the gloves used should be exactly 12 oz, unless the competitors weigh less than 165 lb, in that case they may use 10 oz gloves. The gloves used in amateur matches must also include white strips or circles across the  knuckles. The scoring system in amateur matches is also highly regulated, only punches wherein the white strip of the glove connects to the opponent’s head or torso is classed as a  point-scoring punch. Due to the high diversity of skill level in amateur boxing circles amateur matches may be prematurely ended by the referee for a number of reasons referred to as RSC’s or Referee Stopped Contests, this may occur due to one competitor outclassing, outscoring, or due to the competitor receiving a severe injury or head injury. Professional matches tend to be significantly longer than their amateur counterparts lasting 10-12 rounds depending on whether it is a championship match or not. A much higher proportion of professional matches are won by either Knock-Out or Technical Knock-Out due, in part, to the fact that professional competitors are allowed to take much higher levels of damage before the referee intervenes and stops the match. Protective headgear is also  prohibited in professional matches and male boxers are required to participate.

Due to the high diversity of skill level in amateur boxing circles amateur matches may be prematurely ended by the referee for a number of reasons referred to as RSC’s or Referee Stopped Contests, this may occur due to one competitor outclassing, outscoring, or due to the competitor receiving a severe injury or head injury. Professional matches tend to be significantly longer than their amateur counterparts lasting 10-12 rounds depending on whether it is a championship match or not. A much higher proportion of professional matches are won by either Knock-Out or Technical Knock-Out due, in part, to the fact that professional competitors are allowed to take much higher levels of damage before the referee intervenes and stops the match. Protective headgear is also  prohibited in professional matches and male boxers are required to participate bare chested. 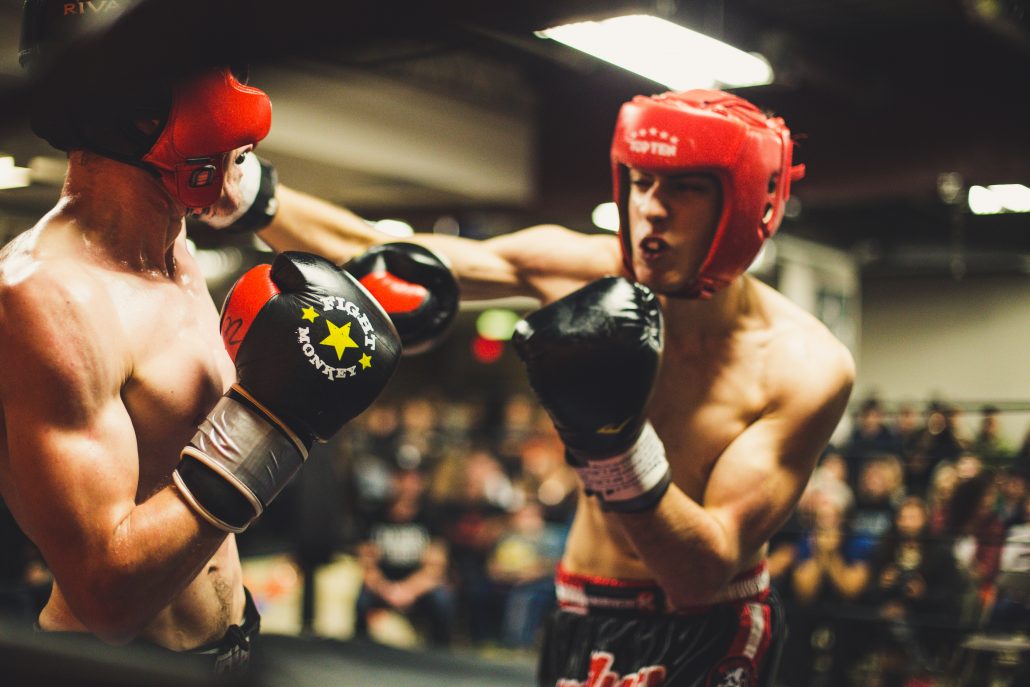 There are multiple different styles utilized in the modern boxing ring each with their own advantages and disadvantages, strengths and weaknesses. Competitors described as ‘Boxers’ or ‘Out-Fighters’ have a tendency to maintain distance from their opponents fighting with fast, long range but relatively weak punches attempting to win matches based on points decisions rather than knock-outs, one famous example of this style would be Muhammad Ali with is famous ‘Float like a butterfly, Sting like a bee’ approach. Another style is referred to as ‘Boxer-puncher’ where the competitor attempts to fight at close range with their opponent, utilizing technique and power to attempt to win the match by Knock-Out, an example of an individual utilizing this style of boxing effectively would be Lennox Lewis. A ‘Counter Puncher’ is a boxer who, rather than being overly aggressive, tries to capitalize on their opponent’s mistakes to turn the tide of the match in their favor either in terms of points or through a knock-out, a particularly good modern advocate of this style of boxing is Vitali Klitschko, this style requires the competitor to have exceptional timing and precision as well as a good ability to predict their opponent’s moves.

A ‘Brawler’ or ‘Slugger’ is often used to describe a fighter that utilizes punching power and aggression over technical defensive ability and footwork. Brawlers tend to take more punches due to their slower and less defensive fighting strategy and aim to win most fights by knock-out, Brawling also tends to be more popular among the higher weight classifications, George Foreman is probably one of the most famous examples of this style. The final main style of boxing is referred to as a ‘Swarmer’, ‘In-Fighter’ or ‘Pressure Fighter’ and relies on staying close to the opponent attempting to overwhelm them with flurries of punches putting their opponent’s off-guard before attempting a knock-out punch, usually from an uppercut, a good example of this style is Ricky Hatton who’s unrelenting flurries of aggression earned him several good victories in his early career.

Of course most modern boxers don’t strictly stick to a single fighting style, they more commonly utilize various elements of each depending upon the circumstances and their opponent’s preferred style to try to seize their advantage. Like a physical game of chess one style can be easily countered by another but which in turn may be dominated by a third, as such the emphasis is often on the boxer themselves to read the current situation and adopt the strategy best suited to their strengths, the conditions and their opponent’s weaknesses.

Photo by Hermes Rivera on Unsplash

This website uses cookies to improve your experience while you navigate through the website. Out of these cookies, the cookies that are categorized as necessary are stored on your browser as they are essential for the working of basic functionalities of the website. We also use third-party cookies that help us analyze and understand how you use this website. These cookies will be stored in your browser only with your consent. You also have the option to opt-out of these cookies. But opting out of some of these cookies may have an effect on your browsing experience.
Necessary Always Enabled
Necessary cookies are absolutely essential for the website to function properly. This category only includes cookies that ensures basic functionalities and security features of the website. These cookies do not store any personal information.
Non-necessary
Any cookies that may not be particularly necessary for the website to function and is used specifically to collect user personal data via analytics, ads, other embedded contents are termed as non-necessary cookies. It is mandatory to procure user consent prior to running these cookies on your website.
SAVE & ACCEPT