Playing a sport is always a good thing as not only does it help people become physically fit, but also hone their skills and minds when it comes to their craft. It also helps that sports are fun to play, especially when you play as part of a team. There are the usual suspects for team sports such as baseball, football, and basketball. But why not try something new; have you ever heard about lacrosse? 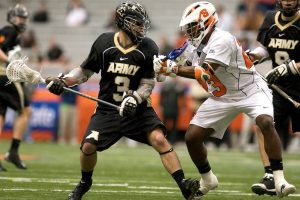 But what exactly is lacrosse? For those who like team contact sports, this is the game for you. In lacrosse, there are two teams with each team being composed of 10 members, with one of them acting as the goalkeeper. Each member wields a long stick which has a mesh net at the end of it which they use to pass, catch, carry, and shoot a rubber ball the size of a fist past their opponent’s goal. If that isn’t enough action for you, it should be pointed out that lacrosse is quite the rough game as you can defend and even get the ball from your opponent by stick or body checking them.

To help give you a picture of how the game goes, it is much like soccer, only instead of using your feet, you use lacrosse sticks, and in defending or stealing the ball, you play it a lot like football wherein contact is required.

This sport has actually been around for a very long time, as the game was already being played in the 1400s by those who have conceived it – the Indian tribes in North America. Starting out as more of a religious ceremony/training for the people of the tribes, it was played in really large open spaces. Unlike the sport that it is today, the goals back then could run as far as half a mile long with no clear sidelines being defined; teams could be composed of hundreds of members; and finally, games could run for as long as a few days with only the nighttime giving everyone a rest.

When the 1840s rolled in, the French who have settled in Canada became interested with the game and thus a friendly match between the French and the Indian tribes ensued. In the late 1850s, a set of rules was officially made for the sport by the Montreal Lacrosse Club. This gave the game a solid foundation, giving rise to the dimensions of the field on which it will be played on and the number of members on each team.

But it was only in 1867 that the rules and regulations of the modern day lacrosse as we know it were established by George Beers, a dentist who is now known as the father of the modern version of the sport. He made the rules that was accepted and recognized by the National Lacrosse Association of Canada.

From the establishment of its fixed and fine-tuned rules and regulations, its popularity boomed and it became the national sport of Canada. It became so popular that it spread to different countries such as Australia, England, Ireland, Scotland, and the United States.

Before you can play lacrosse, you will need a few things. From equipment, to the gear and the ball, everything must be of regulation size and quality.

How to play lacrosse?

While the game can be compared to both soccer and football, it should be pointed out that its rules and regulations are far from those sports. For one thing, the match is set to for 60 minutes and the game could be divided into quarters or halves, depending on the players, male and female, respectively. Another technicality which should be noted is that at the center circle of the field, there is a faceoff with each game, quarter, and every after a goal is scored.

There was talk of attackmen and defensemen earlier and each of them have their own respective positions when it comes to the field. Defensemen are required to stay in the opponent’s offensive zone, while the attackmen are required to stay in their team’s offensive zone. There is also a rule about attackmen staying away from the area of the goal which is known as the crease, a 9-foot semicircle which goes from one goalpost to another.

Because the game can be quite physical and rough, there are referees which monitor the action. These referees ensure that no player will suffer from any injury due to some physical play fouls. Each foul, both technical and personal, will give a player a penalty, which can last anywhere from 30 seconds to 3 minutes. Incurring five penalties will result in ejecting the player from the game.

While this covers just some basic information to appreciate and understand what the game is, what the game requires, and how to play the game, there is still more to learn. Lacrosse is a fun and great sport that is action-packed, builds physical prowess and discipline. Try it out for yourself and discover why this sport has been around for hundreds of years and has been so popular!